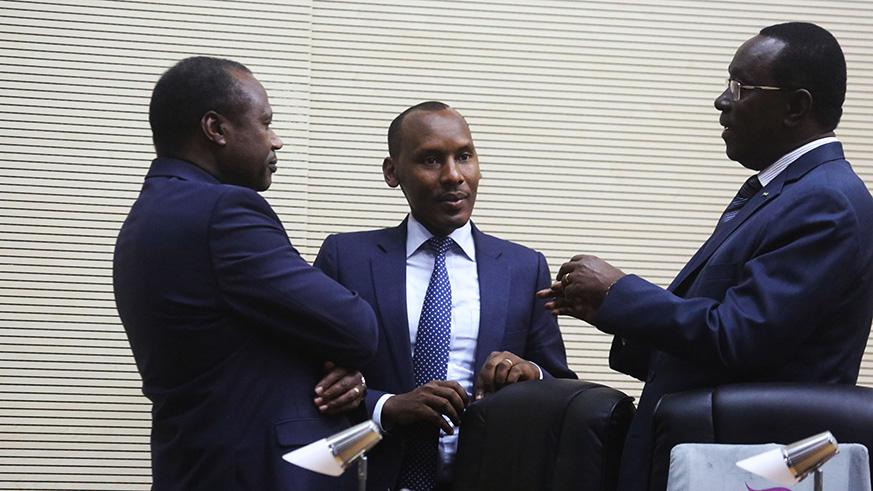 Caleb Rwamuganza, Permanent Secretary in the Ministry of Finance and Economic Planning, and his co-accused appeared before Gasabo Primary Court where they were charged with various counts linked to mismanagement of public funds.

Rwamuganza is the treasury secretary, as well.

Other officials include Godfrey Kabera, the National Planning Director-General, and Eric Serubibi, who was the Director-General of the Rwandan Housing Authority (RHA) until recently.

Another co-accused in the case is Christian Rwankunda, formerly the Rwanda Social Security Board (RSSB) Deputy Director-General in charge of fund management.

The officials, who are all in custody, face charges including misuse of public property, infringement of public tenders procedures and complicity in flouting tendering procedures.

They all appeared in court with their lawyers on Thursday, June 11, for bail hearing, although it did not materialize, owing to the failure of the prosecution to feed the details of their charges into the online case management system.

This is the second adjournment of the case.

Appearing before the court, the lawyers of the defendants complained to the court that they were unable to access the files detailing the accusations that their clients are facing because they had not been fed into the system by prosecution.

“Two days ago, we logged into the online system and reminded court and prosecution to assist us with the documents concerning our clients’ charges. But until today, it has not been done,” said a lawyer representing Caleb Rwamuganza.

Some lawyers have also cited other obstacles.

Among others, Serubibi ‘s lawyer Alphonse Sebazungu told court that he was stopped by police from accessing his client from where he was being held to prepare for their defense.

“Yesterday I wanted to meet my client at a police station where he is being held, but police officers did not allow me. Yet, it was necessary for us to meet and prepare the defence,” he said.

In response, the prosecutor responsible for the case told court that there is a general problem in the online system , specifically on the part of the Rwanda Investigation Bureau (RIB) which is currently unable to feed documents into the system.

Here, the prosecutor said the lawyers of the defendants would have approached the court or the prosecution itself and got the documents in some form, on flash disks for example.

Related Topic  The Effects of Religion on the History of Identities, Violence, and Stability in Nigeria

About the claim of lawyer Sebazungu that he was stopped from seeing his client, some of the obstacles were due to police measures to prevent Covid-19 from spreading.

He said they talked to police (prosecution) to arrange the meetings between lawyers and their clients.

Because of these challenges, the presiding judge postponed the bail hearing until June 18, to allow the lawyers time to review the files and to consult with their clients to discuss their defense.

Consequently, no declaration was made during the proceeding of the information in the case and the manner under which the officials colluded.