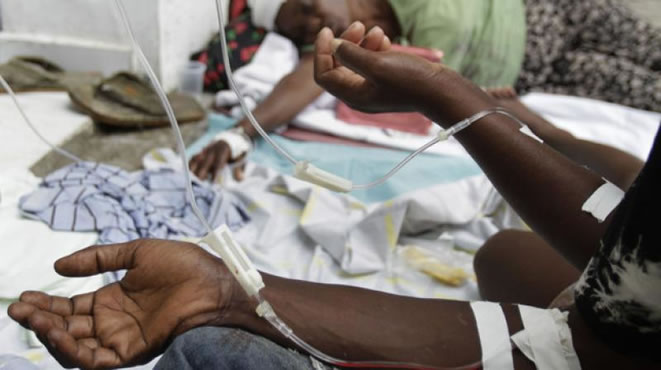 No fewer than five persons were confirmed dead out of 12 reported cases of cholera on Friday at Lafenwa, Abeokuta North local council of Ogun.

The Permanent Secretary in the state’s Ministry of Health, Adesanya Ayinde, said at a news conference in Abeokuta that one person died in the hospital and four in the affected communities.

Mr Ayinde revealed that eight cases were reported from health facilities and four picked in the communities from retrospective case search and confirmed through laboratory test.

He said the state epidemiology unit had earlier received a report of laboratory-confirmed case of cholera from the Federal Medical Centre, Abeokuta, after which it immediately swung into action.

According to him, the state government is on top of the situation, adding that it has commenced thorough investigation and currently fumigating communities to prevent spread.

He revealed that the government had conducted active case search in health facilities, pharmacy outlets and medicine vendors in the affected areas.

He further said that cholera alert have been sent to all health facilities, providing steps to take in case of suspected case.

He said the State Hospital Ijaiye, Abeokuta, had been identified as referral centre for treatment and had been provided with materials to manage cases.

“The case (index) is a 33 year- old gravid woman who presented at FMC on referral on the 19th of November from a private facility,” he said.

“She resides in Abule Otun, Lafenwa, Abeokuta but trades at Kuto Market.

Prior to onset of symptoms, she ate rice (purchased from food vendor) with “pure water” at Kuto market.

“There have been prior reports of suspected cases of cholera linked to Kuto market but could not be confirmed because they had commenced antibiotics.

“A total of 12 cases (index vase inclusive) have been line-listed, eight reported from heath facilities and four picked in the communities from retrospective case search.

Mr Ayinde said the government, through the water corporation, would commence screening of local sources of water in the communities.

He, however, warned residents of the state to desist from open defecation, saying that any house found without toilet would be sanctioned.

He appealed to the people to maintain good personal and environmental hygiene, urging them to wash their hands after visiting the toilet. (NAN)