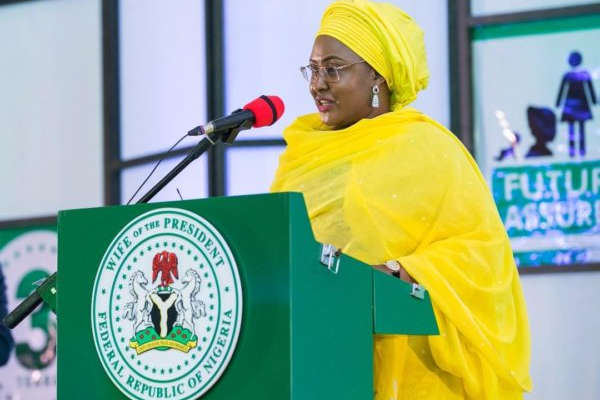 Mrs Buhari, who is also a Global TB Ambassador, spoke at the UN Headquarters in New York on September 22 at the UN High-Level Meeting on Tuberculosis.

In a statement issued on Monday by the Information Director to First Lady of Nigeria, Suleiman Haruna, Mrs Buhari challenged leaders to increase political commitment and to be accountable for their promises to increase resources and to support effective and sustainable partnerships to end TB.

She was represented by her husband’s assistant, Hajo Sani, at the meeting.

The purpose of the meeting was to promote multi-sectoral action to advance the commitments made at the United Nations High-Level Meeting on Tuberculosis last year.

Mrs Buhari referred to the last meeting of the African First Ladies together with the General Assembly of the African Union in Addis Abeba, where she made it clear that tuberculosis should be integrated into the fight against HIV / AIDS in order to harmonize plans and actions for the two related killer diseases.

“As a Global TB Champion and Ambassador, I have used my position as the First Lady to promote TB among stakeholders in different sectors, with support from Stop TB Partnership Nigeria and working with wives of state governors.”

She called on governments, agencies of the United Nations, development partners, academic and research institutions, civil society, media, celebrities, patients and survivors, private sector to close ranks and ensure the fulfillment of the last meeting commitments.

While global progress has been made in the first to end TB globally, Nigeria is one of the highest burden countries of drug-resistant TB.

In the country, funding for TB control has also remained low as most of the funds come from international donors.

In his speech delivered by Zsuzsanna Jakab, Deputy Director-General of the World Health Organization (WHO), Tedros Ghabreyesus confirmed that successes are being recorded in the fight against tuberculosis, but called on stakeholders to move forward and accelerate progress made so far.

He spoke extensively on the Multi-Sector Action Framework (MAF-TB), which aims to support effective accountability at global, regional and country level for governments and all stakeholders to accelerate progress towards ending the tuberculosis epidemic.

He further stated that the Framework is fully aligned with the End TB Strategy and the Sustainable Development Agenda 2030. He said that now is the time for action and the time for delivery.

The meeting was organized jointly by the Russian Federation and the World Health Organization and was attended by UN agencies, representatives of civil society and funding institutions, as well as delegations from Russia, South Africa, Vietnam, Japan, Uganda, Zambia, Chad, Oman, and Barbuda and Nigeria.