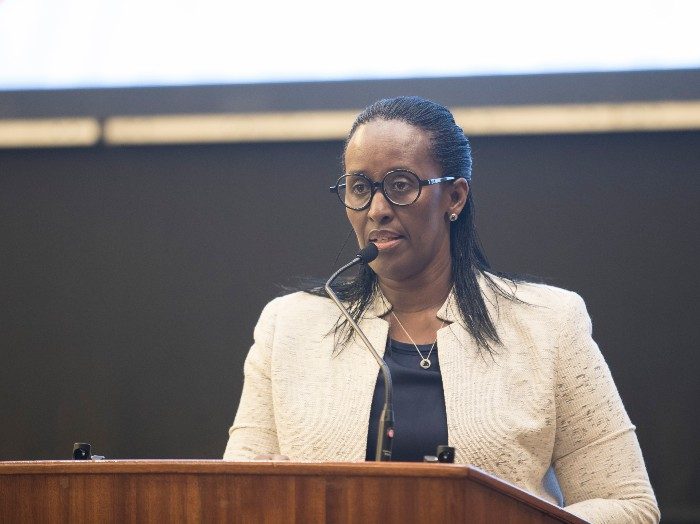 Rwanda’s First Lady, Mrs. Jeanette Kagame, has called for concerted attempts by all Rwandans toward the  country’s goal of eliminating hepatitis C in five years.

Mrs Kagame made her remarks as the Guest of Honor at an event to support the elimination of Hepatitis C, organized by the Ministry of Health, the Private Sector Federation and the Interfaith Council of Rwanda. Rwanda’s 5-year control and elimination plan, costing about $44 million, seeks to eliminate the country’s Hepatitis C virus by 2024.

Through the initiative, the government seeks to screen about four million individuals aged 15 years and older,  perform viral load trials for about 230,000 individuals, and treat 112,000 chronically impacted patients.

Hepatitis C is common among 4 to 8 percent of Rwandan adolescents and is known to be the country’s second  biggest cancer contributor.

Speaking to the participants at the event, Mrs Kagame highlighted the role they should play in the fight against the  disease, starting with saving a minimum amount of funds on a daily basis

“When we are looking for solutions, let us always remember what we have managed to achieve despite the fact that we did not have much,” she said.

“Let us jointly seek for ways of contributing towards the elimination of Hepatitis C,” she added giving the example of this possibility that, “A litre of fuel costs about Rwf 1000. If a person decides to travel by foot, he can save between Rwf 500 to Rwf 1000 daily. By the end of three months, you would have saved about Rwf 90,000, an amount that is enough to provide full treatment for a Hepatitis C patient”.

Members of the Private Sector Federation, clergymen, leadership and officials from the Ministry of Health were  present at the event, among others who pledged to contribute to the cause.

Among the significant promises included, Msgr. Fillipe Rukamba, the Bishop of Butare Diocese, who said the Church would set up unique facilities for individuals impacted by the Hepatitis C virus. He also pledged that religious organizations would make attempts to raise awareness of the illness among the population; what it is and how it can be fought and avoided.

Speaking on behalf of the Private Sector Federation, Mr. Robert Bafakurera said the private sector will contribute  five million usd to the project over the five-year period set for it.

Dr. Sabin Nsanzimana, Director-General                of the Rwanda Biomedical Center, highlighted and credited the government’s efforts to negotiate with producers to  reduce the cost of hepatitis drugs over time.

According to Nsanzimana, hepatitis drugs now cost about USD 60 per dose as compared to the USD 0ver 85000 in  latest years.

Hepatitis C is one of the main public health issues influencing more than 71 million people globally.

Antiviral medications can heal more than 95 percent of individuals with hepatitis C infection, lowering the risk of  death from cirrhosis and liver cancer, but access to diagnosis and therapy is small.